The Flavour of Spite – One 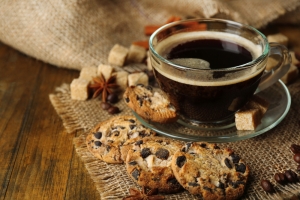 The first time I saw her I wondered what her flavour would be. I was tempted to think crème brulee, for the hard, brittle shell and sweet softness within. Her pretty face was crumpled in a frown and she was barking out some demand to her co-workers as she emerged – Persephone from Hades at the birth of summer – this pastry chef in training from the kitchen in my favourite patisserie.

She stood for a brief few moments near the counter, talking rapidly to one server near the till. I couldn’t make out the debate beyond realising it has something to do with an order for some ingredients that had failed to arrive with the morning deliveries. The hopeless young man just looked at her, bewildered and stupid, and I had the strongest urge to walk up to him and belt some sense into him, but I refrained. Over the delicious wafting scent of my coffee I watched, and instead of drinking my beverage, I drank her in.

She was slim, dressed in a white smock, dirtied somewhat from the kitchen labour. Her flaxen, perfect hair fell in tendrils from an ill-fitting bun. One moment she wiped an errant strand away from her eyes with distracted irritation, and some flour from her hands made an even paler streak on her ivory skin. Aunt Imogen, curse her soul, would have called her the perfect Aryan princess, but she would have been right.

My god, Imogen might actually have approved! The thought chilled me for a moment, but I let it pass, because for a brief second she seemed to register my attention and looked directly at me, the brightest blue eyes looking straight into mine. But just as suddenly she dismissed me and the moment and it stung mildly. I doubt I even really registered with her. I put my coffee cup down and sat back. She was still haranguing the poor server and I changed my mind about her flavour. She was mint slice, perhaps, a rich inviting chocolate with a cool within. And then she was gone, lost back to the kitchen, and I wondered.

Her flavour might be different, of course. It might be uniquely hers and an amalgam of her inherent soul properties. I’d first learned to think of people as flavours from perpetually ancient and now thankfully passed over Aunt Imogen, may she rest without peace in the most poisonous nest of vipers imaginable in the lower circles of hell….

In those years she raised me after my parents’ unfortunate demise I learned about the flavours of life. She was obsessed with food, with gastronomy, the culinary arts. And I can thank her for my excellent taste and my skill in the kitchen. I can even thank her for what she taught me of our sacred heritage and for giving my life some purpose through that. But that is all. I can’t think of a flavour for her in any food, no matter how repellent. Her cruelty and her crimes, her control and her craft – all these things she has passed to me, a far more worthy recipient than she would ever have been. But she gave these lessons in kind, and there was nothing kind about that.

So that’s when I realised what Aunt Imogen’s flavour had to be – this petty, picking, parsimonious predator. She was the flavour of spite.

I'm drawn to blogging as a way to share ideas and consider what makes us who we are. Whether it's in our working life or our creativity, expression is a means to connect.
View all posts by Helen →
This entry was posted in Serial Horror Stories, The Flavour of Spite and tagged culinary, darkness, evil, Flavour of Spite, Horror, Horror writing, obsession, possessive, Serial stories. Bookmark the permalink.

6 Responses to The Flavour of Spite – One