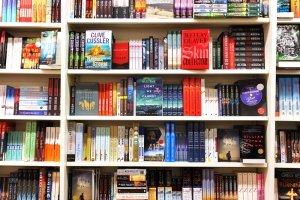 It’s good to be thrown in at the deep end, Lisa told herself silently, that way you learn to swim so much more quickly.

The cause of her reverie was being left alone to mind the shop by her far more experienced colleague only on the second day of her new job. Stacey, the more experienced bookstore sales girl was also more seasoned when it came to town affairs it seemed, of the romantic kind. She dazzled Lisa with a monologue of herculean length about her latest ‘great love’ and how she just ‘had to see him today to make sure he wasn’t playing up with that bitch Teresa’ and how that could only possibly be achieved by ‘ sneaking out at lunchtime and going down to her gang’s favourite cafe in Middle Street’.

Lunchtime being, of course, the most likely time for the illicit rendezvous in Stacey’s mind. The innocence – or perhaps roe properly naiveté – of that was mildly beguiling to Lisa, so much so that she unfortunately found herself agreeing to mind the shop alone over the busiest period of the day. Lunchtime was when all the office and other workers emerged to shop and therefore when they were most likely to come in and actually buy something. And expect service, expect a salesperson who truly knew what she was doing, or where the various types of books could be found.

Lisa watched the door nervously, traitorously wishing every passerby would do exactly that – pass by. And her darker will seemed to be working quite well. It was a bright, sunny day and perhaps that is not the ideal day for book shopping. For whatever reason it was quieter than the day before, at least so far, and she was grateful for that. Yesterday she had shadowed Stacey like a little lost lamb, watching her guide buyers to books, extol their virtues, encourage sales, then ring them up on the cash register and fold them in bags to be taken away. For a silly girl she was quite accomplished at that, making Lisa feel, at twice her age at last, like a ridiculous novice.

She could castigate herself quite efficiently some other time. For the moment other needs were more pressing and she feverishly reminded herself of the various book categories and where they were placed in the store – popular fiction near the front, also with new release books; crime and true crime to the left; romance and historical fiction to the right. Down the back there were biographies, non fiction and some self-help and spiritual fare. Literature, proper literature, being less popular than popular, was also down near the back, a hallowed area near the hallway that led to the back office. Lisa was not sure what that said about the state of literature these days, or the state of education, and the latter made her worry briefly for Mandy. What did they teach these days in school?

As her mind wandered to such disturbing thoughts an even more disturbing thing occurred. The tinkling bell at the doorway which announced someone coming in chimed lightly and far too happily for Lisa’s taste. She looked sharply to the door, dreading a shopper who might want to do anything more than browse.

Please just be looking, she thought, considering how clumsy she felt with the cash register and sales processes. Stacey’s induction had left a lot to be desired and the bookstore owner, Gavin, did not bother himself with such matters and rarely even deigned to visit his store himself. For a bookstore owner he seemed singularly uninterested in books. But then something made Lisa suspect he was interested in very little in actual fact, for interest would require energy, and he seemed to have so little of that overall.

Coming in from the bright sunlight at first the figure seemed like a dark shadow to her. As her eyes adjusted she found herself staring at a man who was returning her gaze with some amusement. She blushed, just like a school girl, and he laughed lightly, walking straight up to the counter, filling her with awe and dread.

The man, who looked like he was around her age or slightly older, was very tall, with dark hair and very dark eyes – brown so deep they were almost black, but she noticed light specks of gold in the irises to help distinguish them from the pupils. She found herself slightly mesmerised. She’d never seen eyes quite like those before.

If the man felt this was intrusive he didn’t show it. Perhaps he was used to his own impact. He held out a strong-looking hand to her in a familiar gesture of welcome. She took it automatically and shook, ever polite.

‘I think we are neighbours,’ he said, ‘I saw you as I passed the shop and had to come in to see if I was right.’

A brief memory of the man in the garden flowed through her and she made instant calculations. Yes, the build was the same. But she asked, ‘Where do you live?”

‘No 6 Mercy Lane,’ he replied, “And yes, I know, it’s that house. I’ve heard all about it. The realtor was obsessed with it when she sold me the place. It was almost like she wanted to cruel the sale for herself.’

He laughed to himself and then continued, ‘And you are No 4 I think, you and your daughter?”

‘That’s right,’ Lisa replied, her suspicions confirmed, and not sure whether she was happy about this or not. This man was unsettling, but perhaps it was just the threat he might actually want to buy something that was vexing her.

Or perhaps it is just that he is too handsome….kind of in that way her former husband had been too handsome.

‘So does it worry you to have such close proximity to infamy?’ he asked, amused still by some internal reverie.

‘The house, or you?” She found herself flirting slightly, surprising herself.

He chuckled, “Possibly both, but I meant the house.’

‘Well then, no. I’m not superstitious.’ Lisa replied.

‘Aren’t you?” he asked, ‘How very sensible of you. For me, I love a mystery and a bit of history. It was part of the attraction in some ghoulish way.’

She shivered. “Well, well,’ she said.

‘But only a small part,’ he said, ‘the house and land are very fine, and former inhabitants are only that. Former. I’ve lived in places with even more colourful history. I find it tends to stay in the past.’

‘That’s comforting,’ Lisa replied, “You wouldn’t want it to repeat. Not something like that.’

‘No indeed, life is always about progress, about the next step in the journey, the past is past, what point is there in it anymore?’ he agreed, then started to turn to go. Good, he was only popping in to say hello, not to buy. ‘In any case, it will be nice to be neighbours. You and your daughter must come over to dinner some time. I’m actually quite a good cook.’

‘How could we refuse then?’ Lisa asked, finding herself noticing the strength of his build and the softness of his voice, even despite herself.

He turned on his heel and she thought she could hear him chuckle again under his breath. A moment later he turned back, shaking his head.

‘Oh, I should have introduced myself,’ he said, ‘How rude of me. My name is Damien Peterson.’

‘And a pleasure to meet you too, Lisa,’ he said, nodding as though to affirm his claim. He turned again, and seconds later he was gone, and she was once more blessedly alone in the shop.

I'm drawn to blogging as a way to share ideas and consider what makes us who we are. Whether it's in our working life or our creativity, expression is a means to connect.
View all posts by Helen →
This entry was posted in Serial Horror Stories, The Hanged Girl and tagged bookstore, darkness, Horror, horror stories, Horror writing, meeting, Serial stories, The Hanged Girl. Bookmark the permalink.