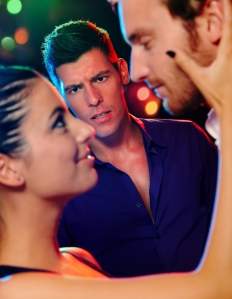 But it wasn’t a club of two, not in real life at any rate. In real life, there was the third party, the triangle’s top point, the manager and the boss, Andrew. The first meeting with Andrew on Monday was difficult. Playing cool and unknowing before Schaden/Lisa in the reception area was a challenge. Dealing with the condescending and patriarchal manner in which he saw Andrew treated her was more like a trial.

And he couldn’t say anything in her defence. He’d lose his big opportunity and she’d be exposed in a manner she dreaded. He had to stay silent as Andrew whistled at her and barked out an order for coffee.

‘And a black coffee..and try not to put too much sugar in the latte this time sweetie!’

He made the term ‘sweetie’ sound like the most vicious of insults. He enjoyed her vulnerability to his attacks, her lack of an avenue for any redress.

Andrew settled back in his large, raised chair behind his desk. Everything about Andrew and his office was big. David wasn’t sure whether this was to match and therefore represent Andrew himself, or whether it was designed merely to intimidate. Either way, it worked.

‘You could treat her nicer,’ David remarked, looking back to the office doorway as though she was still standing there.

‘I could,’ Andrew agreed, laughing, ‘But you have to keep them under control.. women..you know?’

‘The girl then? It’s her?’ David asked, feigning a prescience that was really no more than inside knowledge. Andrew snorted slightly and shook his head, grinning like the Cheshire cat.

‘Ah yes, she was at your gig wasn’t she? Well spotted, and a good memory I see! You have an eye David!’

‘I have been told that,’ David agreed.

‘I think she’s seeing someone else..’

David panicked slightly. He’d started this, and now he had to see it through. Was Andrew playing him, did he know? If so, should he just go head to head now? Or was Andrew completely clueless, just expecting an ally in another man? For the moment, unless proven otherwise, it was safest to go with the second interpretation. And if so, to continue to play dumb, as before. What would he say to stay..in character?

‘You’re married Andrew, You can hardly complain…’ he said finally, deciding upon the argument he presented only days before to Lisa herself.

‘So?” Andrew asked. It was hard to tell if he was genuinely asking because he did not see the relevance at all, or whether he was being deliberately obtuse for comic effect. In either case, he changed the subject abruptly from Lisa to David’s work and its potential. The speed of the change was unsettling, disorienting at first. Before he knew it David found himself agreeing to terms he had barely had time to hear, let alone process. Later he would muse this was a negotiating tactic of Andrew’s and an effective one.

Of course, Andrew couldn’t know the efficacy of this had been heightened by David’s own secret and the discomfort this placed him in – that he was the person Lisa was seeing, albeit only once in real life so far, but constantly on line. Clearly he didn’t – he dropped the topic – at most he’d used it as a generalized threat which David assumed he might use on every man even vaguely in her midst, a precautionary measure. If he knew about the lunch, or the net, he’d have gone in for the kill. Andrew wasn’t catlike – he wouldn’t wait to play with the mouse. Andrew was a predator without such finesse. And this was just as well.

True to David’s assessment, when Lisa brought the coffees in there was nothing in Andrew’s reactions and responses that suggested he had guessed this in any way. Given that David had worked out the real relationship, Andrew felt even freer to condescend to the girl.

My god, thought David. She’s about a million times smarter than you, and if she could you’d be the first to know it. Hell, I’m at least a thousand times smarter, and if I could I’d let you know. But Andrew had the power, he was the manager, he held the keys to the kingdom that was comedy, and for Lisa possibly to a viable income and lifestyle. He could not be gainsayed so easily. The price of pride would be, in this instance, far too high.

But she had to hate him, she had to, with the way he treated her. And that gave David hope. Yes, it was dangerous and complicated to pursue one another, but there was a thrill in that. And now David felt he knew what buttons to push with her, what she would respond to. If she avoided the intimacy he sought simply by virtue of their internet similarity, he could bring it into being through mutual hatred. Hatred of Andrew.

Any strong emotion would do.

I'm drawn to blogging as a way to share ideas and consider what makes us who we are. Whether it's in our working life or our creativity, expression is a means to connect.
View all posts by Helen →
This entry was posted in Schadenfreude, Serial Horror Stories and tagged danger, Horror, jalous man, jealousy, schadenfreude, serial horror stories, suspicion, triangle. Bookmark the permalink.