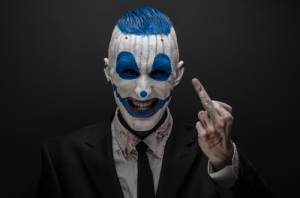 I was always the office clown. Every major event, especially Christmas and Easter, I’d put on a show. And in between I was the prankster, the joker, the one to bring a bit of levity into things.

I had a social purpose there. I was liked, goddamnit! I was popular.

I think my bosses hated that, especially Craig.

Craig is about as funny as a broken toe, and very much as painful. He came in with a corporate takeover about a year ago and since then he’s done everything he could to take the  life out of the place. He calls it ‘cultural re-alignment’. I wanted to re-align him, I can tell you!

We all wanted that.

But it seems we aren’t people of action, after all. Supposedly gung ho, get ahead types in the corporate world, we kind of fold when the regime changes. It wasn’t even subtle. Over time it seemed no-one even wanted to see the funny side, let alone laugh at anything I had to say. The life went out of everything, like Craig was some fat, slug vampire force draining us all.

Here’s the thing, halloween was always my favourite time of the year. I got the teams to have parties, to celebrate, this magical moment each year. But this year, nothing. A damp squib at best. Everyone was so worried about keeping their jobs, which is reasonable on one level since half the staff had been fired in the preceding months already. And Craig would pull his slug-like self throughout the office each day, like he was just searching for the next head to roll.

I understood it, but where was the fight? Only left in me I suppose.

So I was the office clown, just not the clown of fun, the clown of nightmares instead this Halloween. It was the fitting time for the action. That’s how I’ve tried to explain it to the police but they don’t have much imagination or humour themselves.

Craig had a lot of blood for a slug. But perhaps about the right amount for a vampire. He’d drained so many others so far, after all.

Anyway it is what it is, and it was what it was. And what it was was inspired, even if I say so myself. Just a big axe, face paint, a grey suit, and a few last words to commemorate proceedings:

‘Consider this my resignation Craig! And your severance too!”

“Well, severance of your head anyway…”

No-one got the joke. Pearls before swine….

I'm drawn to blogging as a way to share ideas and consider what makes us who we are. Whether it's in our working life or our creativity, expression is a means to connect.
View all posts by Helen →
This entry was posted in Horror Flash Fiction and tagged clown, corporate life, dark, death, flash fiction, Horror, murder, office, office clown, severance. Bookmark the permalink.