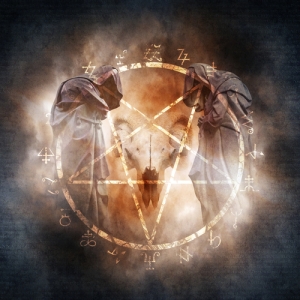 On his thirty-third birthday the party was a ritual. He had been preparing for this most of his young life, so he was neither dismayed nor nervous.  He had been groomed for the moment, and had studied all the texts avidly. He understood the keys of the kingdom, the riches of the world, were inextricably tied to this moment and to his destiny.  His lineage.

In his late teens and early twenties he had been slightly radicalized for a time.  He almost chose to slough off these family ties and go out on his own, proclaiming a more liberal ideology that said he should rise on merit rather than blood.

But then, he only almost did that.  At heart, he was a pragmatic man.  And he knew how important the heart was to everything, everything.

By thirty he was back in the fold, a proficient and enthusiastic supporter and participant.  He worked throughout the various degrees of initiation with precocious speed.  Everyone said he was more than born to this, that he was a centuries old soul, returned for the good of the family.  How could he then let them down?

The heart, the heart of the family. It was always about the heart.

His best friend, but one never of his line, never of his blood.  A friend who was close in everything, except this, as he would never have been allowed to join them. But now, even he was involved, against his will and against the final breaking parts of his more privileged friend’s own soul.

His heart, the thirty-third heart. It was everything.

So the man who would be king raised his knife above the chest of his friend: one who futilely struggled even now against bindings he could never breach.

And with a slight regret but also the glory of acceptance, he brought the knife down.

Down to the beating, thirty-third heart.

I'm drawn to blogging as a way to share ideas and consider what makes us who we are. Whether it's in our working life or our creativity, expression is a means to connect.
View all posts by Helen →
This entry was posted in Horror Flash Fiction and tagged bloodlines, dark, family, flash fiction, Horror, numbers, numerology, ritual, sacrifice, thirty three. Bookmark the permalink.