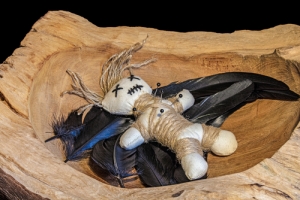 Lucy made these little dolls. She called them Candy Kids, and she said they were innocent. She learnt how to make them from her grandmother, who she always claimed had gypsy blood. We’d laugh about that,and I liked her dolls, so much so I would put them up on my bedroom mantelpiece whenever she made one for me.

She starting making them when we were both ten years old. I was her best friend in those days, so she would show them to me. But she’d tell me to hide them if other friends came to play. In fact, I always thought she rather disliked the thought that anyone else might visit me. She was kind of possessive that way.

One day I made a new friend. A new girl in town named Sharon. She was simple and sweet, and very athletic, so many of us looked up to her a bit. She could run like a gazelle, faster and further than any of the rest of us. Lucy didn’t like her though, and was less than impressed with her fitness and skill.

“I could make her run so fast she’d burn up on the spot,” Lucy said one day. She was holding one of the dolls in her hands, sort of twisting it as she spoke. I found it a bit disturbing.

More disturbing was the fact that Sharon then disappeared. The whole town went hunting for her, but she was never found. Townsfolk became suspicious of strangers. We felt the danger of the other in our midst.

Lucy wasn’t afraid though. I once said I missed Sharon, and she gave me the doll she’d been holding that day.

After that, I started to avoid Lucy. She frightened me. I wanted to throw away the doll she gave me, but somehow I couldn’t bring myself to do so.

Eventually Lucy accused me of abandoning her. She wanted to know why, but I couldn’t begin to tell her.

Then I disappeared. The townsfolk searched for me too, and I’d like to have told them where I was, but I couldn’t speak. Not anymore. The stitching kept my mouth shut.

I'm drawn to blogging as a way to share ideas and consider what makes us who we are. Whether it's in our working life or our creativity, expression is a means to connect.
View all posts by Helen →
This entry was posted in Horror Flash Fiction and tagged dark, dolls, gypsy, Horror, horror flash fiction, lost children, missing children, spells, voodoo, withcraft. Bookmark the permalink.