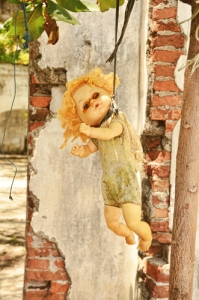 Wilson was a nasty little boy. I always knew it.

I was about five years older than him, and he was my neighbour. He looked like a little angel. Shock of pure blonde hair on the whitest of skin, a cherubim in training.

All the mothers in the street doted on him. Sometimes I thought my own mother would have preferred him to me as her child. Not that she ever said that exactly, but she would coo about how sweet he was anytime she saw him, and she seemed to almost worship his mother as though she’d given birth to the second coming or something.

I tried to warn my mother but she would spank me and send me to bed without my supper. I tried to tell the other children, but those that liked him wouldn’t listen, and those who sensed what I felt didn’t really need to be told and avoided him like I did. In those days in our neighbourhood it was like there were two camps, unspoken but clear. The pro-Wilson camp and us.

Wilson had a sister he seemed to tolerate. Even the girl’s parents thought little of her compared to Wilson. I saw him push her once when she was a toddler down the front stairs, and she survived the fall but narrowly, but her tears and wails fell on deaf ears as Wilson cried with his false guilt. He got all the attention, little angel that he was.

How he would have suffered if his little sister was hurt!  Yeah, right…..

Even when they found his sister’s dolls hanged outside, and her childish attempts at painting torn to shreds, no-one would think it was Wilson that did it.

Must be some nasty neighbourhood child, they all said.

But Wilson was the nasty neighbourhood child. And some of us knew that, and so many, many years later when people started dying in the neighbourhood, we knew who it was behind it all. Little Wilson, the nasty cherubim, all grown up, and fallen it seemed, just like his real father. The one we all knew he had to have, devil that he was.

Angels of a feather, you see, stick together.

I'm drawn to blogging as a way to share ideas and consider what makes us who we are. Whether it's in our working life or our creativity, expression is a means to connect.
View all posts by Helen →
This entry was posted in Horror Flash Fiction and tagged angel, cheribum, children, darkness, evil, fallen angel, Horror, horror flash fiction, murder, nasty. Bookmark the permalink.