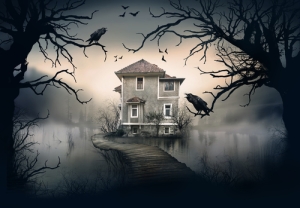 She had a house she visited in her dreams as a child.

While most dreams are ephemeral and never return – as individual and as special and as untrappable as a snowflake – this dream and this house returned, always the same, always just as she remembered.

Some might have found the house frightening, like a ghost house from a fairytale, or something glimpsed on some late night movie. But to her it was just the house, just the place she knew. She didn’t mind the misty walkway leading to it, or the uncertain lake below. She even liked the ravens that cooed and cawed at her whenever she returned. The house itself was not forbidding to her, though it seemed to live in some way, have an intelligence and a purpose that she knew her actual home did not possess.

The house, she thought, called to her, as though it was her real home, her secret home.

Inside was emptiness. Furniture covered in cloth, as though protected by the owners when they left some time before.

She would climb the staircase,the pull down the ladder to the attic, and go up, up to the place she liked most of all. There she found some abandoned toys – a teddy bear, a rocking horse, things of past she’d only ever read about. A different life, a different time.

Sometimes she thought she caught the glimpse of another little girl in the attic, just out of th corner of her eye. But when she turned to look more clearly, only dust floating in the sun-pricked air showed any movement, any life. She thought it might be the ghost of the little girl who lived here before, and made up stories about her dying young and the family moving on, leaving this home, because it was just too sad to stay.

“We’re together” she’d say to the air, trying to reach the ghostly girl. “Together alone.”

At some stage as she aged she lost the house, she lost the dream. But life is busy and growing is an earnest matter, and dreams shift for a young girl to love, to education, to career. She barely noticed the loss.

Till many years later she had her own daughter, and one day little Miriam came to her and told her about the house she dreamed of, and what was within. It was her house, her dream house, in another’s dream.

“In the attic mommy, there is a little girl who looks a lot like your photos when you were young. I try to talk to her but she doesn’t hear me. It’s like we are both there, but both alone.”

She didn’t know what to say, struck both by the strangeness and the odd wisdom of her child. And the balance, the memory, and the wonder of another little girl she sensed there, but could never fully see. Was it her then, was it Miriam, after all? Both there, but both alone. She and the house, so many years ago, together alone, and now her memory, her childhood ghost, and her daughter, united, together but alone.

She did not really know why, but the thought made her cry, and her daughter hugged her, not even asking what the matter was, as though she somehow knew.

As though both of them somehow just knew, and the house had shown them both something, in its sad, strange, haunted way.

I'm drawn to blogging as a way to share ideas and consider what makes us who we are. Whether it's in our working life or our creativity, expression is a means to connect.
View all posts by Helen →
This entry was posted in Horror Flash Fiction and tagged childhood, dreams, flash fiction, future, haunted house, prophecy. Bookmark the permalink.