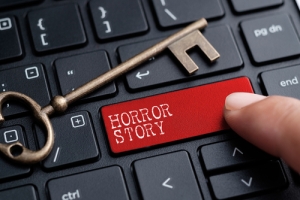 Writing to order these days, he thought. Last week it was comedy, this week horror. Dialling it in.

Somewhere along the way he’d lost his spark. When was that? The endless revisions to fit varying tastes? The dumbing down of concepts or literary flair to fit mass market audiences? The necessity to write what they wanted if you wanted to be published or paid, and never what you wanted?

At what point had it all fallen away and become a job, rather than a passion?

When he was young he’d wanted to be the new Hemingway. Now the best he could hope for was to be Writer #5 in some television team, or a purveyor of light weight romance or schlock horror under a variety of pen names.

So when the keyboard seller came to call, offering him the easiest out of all, the magic keyboard that wrote sufficiently mass market garbage in any theme – just choose the keystroke for the genre he’d extolled like it was a one way ticket to an orgasm – he bought it. He bought the keyboard, and he sold the last of his dreams, all in one monetary, expedient exchange.

So this morning he pressed ‘horror story’ and out came some zombie filled excrescence that would surely hit the mark. It only took half a sip of coffee to be done, when in the old days he’d go through jug after jug of the liquid, fired by creative dreams and caffeine combined.

He thought at first to do this would give him time to then work on something really creative. Press the keys for the payable tripe, then use his time for something more important – even if it never got published. Bu something strange happened he hadn’t reckoned on. Every time he pressed a key on the magic keyboard a piece of his true creativity was sucked up and reconstituted through its programming to produce the mass consumed offerings.

So piece by piece, anything creative in him was dying, withering away, consumed by the keyboard that had meant to be a help but was turning out to be a cannibal of his soul.

Got to pay the bills, he thought, as he pressed a second key to produce a romance script for a tv pilot. His fingers felt electric, but with the power running out rather than within. Another piece gone, the well running dry.

It occurred to him that once no more creativity was left in him the keyboard probably wouldn’t work any more. He’d have to find a real job, and stop these writing dreams. But hell, they’d died already, so what was the point in caring anymore anyway?

I'm drawn to blogging as a way to share ideas and consider what makes us who we are. Whether it's in our working life or our creativity, expression is a means to connect.
View all posts by Helen →
This entry was posted in Horror Flash Fiction and tagged creativity, dark magic, hope, Horror, horror flash fiction, keyboard, magic, publishing, soul, writing. Bookmark the permalink.