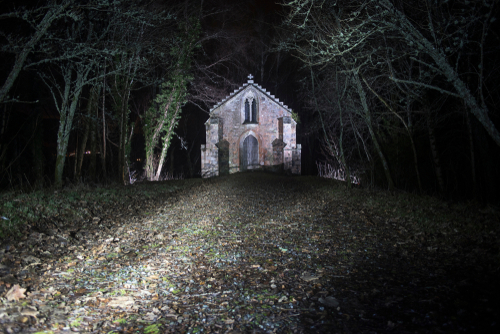 They would come to worship in the depths of night, to these hallowed grounds.

The forest marked the edges of humanity and the realm of the divine seemed but a heartbeat away, bleeding into their world through little candle lights.

In hushed tones they prayed, prostrate on stone cold floors, willing the angels to descend from heaven, drawing them down. But the angels never came, not to such anodyne offerings.

And so in time they came to believe that more must be offered than just spiritual belief and fealty. The ancients knew what was needed, and now the modern world had forgotten.

The gods crave blood, they started to say, and angels must imbibe in this holy offering to rise, to fight, to bring the new world so yearned for, so needed.

Once said, it could not be unsaid or forgotten. It frightened them at first, and they prayed ever more earnestly, hoping to be wrong. But the church was silent and empty but for them, resolute in its demands.

“These are hallowed grounds” they finally admitted. “And they must be appeased.”

That’s when the children started to go missing from the town. Chosen carefully one might assume, given few that disappeared had attentive or caring parents. Most weren’t even noticed, not really. Few even had photos on milk cartons. Still, they disappeared. I noticed.

But when it started I was just a child, so I kept my silence, not wanting to disappear too. My parents cared for me and weren’t involved. They travelled from town to town with work, so we left soon enough. And that might have been an end of it for me, but I remembered. One of the missing was a friend. My best friend. And you don’t forget that.

So I have returned, all these years later, to these hallowed grounds. Life has toughened me, taught me, and I have now – as they say in the movies – a very particular, special set of skills.

And I know a time for reckoning has come.

I'm drawn to blogging as a way to share ideas and consider what makes us who we are. Whether it's in our working life or our creativity, expression is a means to connect.
View all posts by Helen →
This entry was posted in Horror Flash Fiction, Uncategorized and tagged belief, dark, faith, Horror, reckoning, revenge, sacrifice, worship. Bookmark the permalink.