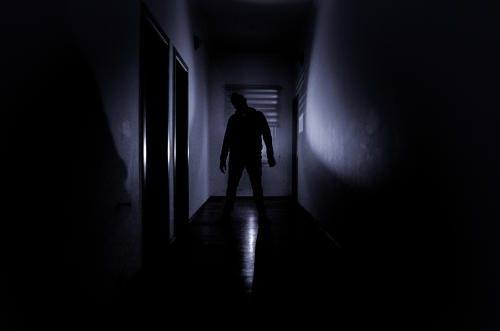 He came in the dark of the night, pitch black like his heart, a shadowy form at one with the shadowy realms.

He never touched her, just watched her sleep. There was a kind of strange, distorted tenderness to it perhaps. A vigil, watching over her. But then, who knew what might have happened if she had woken and had seen him there. Would he be protector then, or the one she needed protection from?

It never came to that. He was quiet and careful. He imbued his very essence in the house so that during the day she would sometimes startle at something, and turn around quickly, expecting to see something or someone. But there was nothing, just the invisible imprint of his nightly visits, speaking to her unconscious in a language she could not understand.

This lasted years and never changed. She changed, she grew, she lived her life. But the nights were the same, and belonged to him.

Until one night, for no apparent reason, he did not come. And then another night he was absent, and then another. Till eventually the house knew, at least, that he was gone.

Had passion died, or transferred its perverse obsession to another? Or had he died, or been force to leave town?

She never knew he was there in the first place, so of course could never know why he had gone. But something in the darkened hallways seemed to miss him from then on, their ghostly, ghastly visitor. And that sadness and loss seeped into her until she left the place, moved on, never really knowing why.

I'm drawn to blogging as a way to share ideas and consider what makes us who we are. Whether it's in our working life or our creativity, expression is a means to connect.
View all posts by Helen →
This entry was posted in Animation, Horror Flash Fiction, Uncategorized and tagged fear, Horror, invasion, night, stalker. Bookmark the permalink.