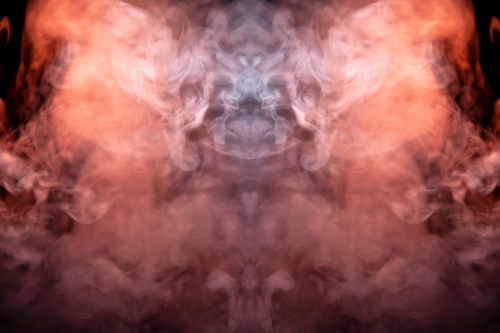 Out of smoke and fire they came.

At first just as strange and unthreatening as seeing a face in the clouds, the creatures born of smoke and fire came.

Friendly at first, their faces smiling, their words sweet, the terrible creatures of smoke and fire came.

One or two, here and there, at campfires or in crematoriums or at bonfires on the beach, the creatures of smoke and fire came.

But then, so much more. Fires spontaneously lit themselves in city streets, in the lush cornfields of the country towns, in the playgrounds of schools.

And as more came, and more were born of the wicked flame, their expressions were not so sweet, their words not so kind. The creatures started to show, with the strength of numbers, their true faces.

And then we knew, the Emergence had begun.

The ephemeral can kill. It can torture in slow, bittersweet ways. It can drive you mad.

It is not constrained by the normal rules of physics. It can seep and creep and crawl and travel vast distances in the blink of an eye.

And its eye is terrible. But more terrible still is its mouth. Their mouths. Their hungry mouths.

I know it’s only a matter of time. The world is theirs now, and we are but the fuel for their flame.

But still, I hide.

I'm drawn to blogging as a way to share ideas and consider what makes us who we are. Whether it's in our working life or our creativity, expression is a means to connect.
View all posts by Helen →
This entry was posted in Horror Flash Fiction, Uncategorized and tagged consume, creatures, End of the World, fear, Flame, Horror, monsters, prey, Smoke. Bookmark the permalink.