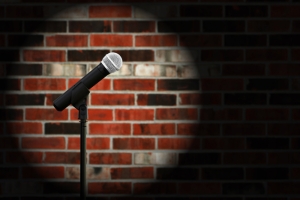 David was tired. He rubbed his eyes because they almost ached. On applying pressure they felt almost bruised. He knew he should turn the light on. Sunset had come and gone and now only the light of the computer screen illuminated the room. He should drag himself away from it. Hours had passed since he’d logged on.

He thought to himself, am I becoming a nerd?

Who said anything about ‘becoming’ the snide fellow Voice in his head questioned him.

Shutup Voice he thought to himself.

Voice had a point of course. He’d never been big man on campus, not even moderately large man, or relatively noticeable man. That’s why he was an accountant, no doubt. That’s also why he wanted desperately not to be one, why he pursued his more dramatic/comedic dreams with fervour he often feared was not matched by talent. But this doubt was the Voice again, he supposed.

In any case, he should be preparing his comedy routine for Open Mic this coming Friday night. It was only half done, if that, and he didn’t want to tank like last time. Sure, it was amateur hour – that’s what Open Mic was – but if you think amateur, you stay amateur. Besides, he knew certain comedy luminaries were rumoured to be attending because of some re-union thing with the person who ran the club. Extra pressure. He didn’t want to fall over in front of them. It wasn’t just pride. It was survival. He knew there were few ‘industries’ more vitriolic than comedy, and few again where news traveled any more quickly, particularly of another’s embarrassment or shame.

So he should be leaving the computer and proving at least to himself he wasn’t in thrall to it. But it was an addiction, particularly when it was at its most beguiling. Like tonight, in his favourite comedy fan chat room where the bitchiness and hyperbole was flowing freely, like cheap wine that was somehow just that bit too horrible and fascinating to refuse.

The girls in particular amused him. There were exceptions, but as a general rule if you went into comedy to get laid, you’d probably be successful, but the choice of partners would be hardly inspiring. ‘Jokies’ they were called, as opposed to groupies, and they often really were jokes. Most comedy girls he knew of, particularly the ones who also congregated to gush over the internet, were from the disaffected at school – the overweight, the plain or ugly, the socially challenged, the stupid, and the pretentious.

Not that he saw them online. David favoured chat rooms of the old fashioned variety, where the only interaction was in text, not in Skype type visuals. He wasn’t that proud of his own looks, to be honest, and also liked the mystery of the typed word rather tha the distorted visual on screen. Or at least he liked to think it was a distorted visual from the few times he had used Skype and decided that couldn’t actually be a good representation of him, the camera most certainly does lie.

Does it? Smirked Voice. He ignored Voice. There was something to be said for living in happy delusion, which probably explained much about these girls. For obviously they came to these ‘invisible’ chat rooms often enough, so something in them wanted to hide just as much as it wanted to be seen. Perhaps it was just the bitchiness of the chat rooms in general that made the inhabitants prefer to be unseen, David was not sure.

And he had to admit the very disadvantages of these girls made them more appealing than repellent to David. He liked their vulnerabilities in a way, he liked their adoration when he performed well, and he coveted its increase when he would become famous. He liked to interact with them, at least at a distance, and it was another unwritten but universal law of comedy that the up and coming comedians needed to flirt and cajole an audience into being. You could be the funniest person on the planet, but if no-one came to see you perform, you might as well have been the worst.

The internet was a good hunting ground for developing a following. And the net was also strangely intimate and personal, particularly and paradoxically if you didn’t ‘see’ each other on line. David found participating in it oddly satisfying. So for pragmatic reasons, and also for those of taste and entertainment, he spent probably far more time than was healthy on the sites and in the chat rooms that pandered to his chosen career.

And besides, when they got all delusional and competitive and bitchy, it was just plain funny. They were a comedy in themselves, though they didn’t know it. They took themselves so seriously. And that was the beauty of it.

All fine comedy revolves around the ridiculous taking itself seriously. That, and the pain of others.

I'm drawn to blogging as a way to share ideas and consider what makes us who we are. Whether it's in our working life or our creativity, expression is a means to connect.
View all posts by Helen →
This entry was posted in Schadenfreude, Serial Horror Stories and tagged chatrooms, comedy, comedy clubs, competition, fans, Horror, Horror writing, nastiness, online, schadenfreude, serial horror stories, social media. Bookmark the permalink.

2 Responses to Schadenfreude – One