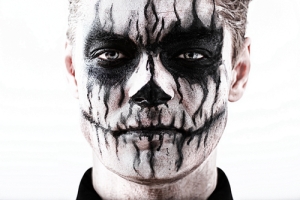 Davy was a rock star. Before he reached such illustrious heights he was just David, a friendly, kind of handsome lad who never really knew his own good looks or casual charm. He had an insecurity which drove him, I suppose, and which was part of his schtick. He never appeared on stage without his makeup, a series of grotesque, dark face paintings that hid him so he could reveal a more essential self.

Well, that’s what he told me anyway. I always thought his real self was normal, bland but pleasant-looking David, but he hated the thought of that. He wanted to be wild and dangerous, so he let face paint do the job.

Fair enough, I suppose,and the public ate it up. He was constantly trending on twitter when some hapless, pathetic fans thought they’d seen the real him, sans makeup and posted the pictures, though they never managed to actually get him. I doubt they’d have realised how ordinary he would look in real life. He could have walked right past them unnoticed, in fact I’m sure he did, many times. He wasn’t a hermit, he did get out in life. He didn’t hide.

We’d laugh for hours over what they thought he looked like. It felt good to focus on the sad needs of others rather than think about what all this subterfuge meant about my friend.

Over time the makeup got worse somehow. It’s hard to explain the shift, or how it felt to see it. I put it down to the needs of his art. His music was pretty dark and depressing actually,  and not really to my taste, but I followed him for our friendship’s sake.

One day he called me in a panic. He didn’t say why, just wanted me to visit him, which I did. I found it odd to see he had the worst of the makeup on when I arrived. That is for the stage, I told him, laughing. But then he started to cry.

It’s odd, seeing one of your friends cry. It’s just not what guys do together, if you get my drift. So at first I didn’t notice, and he was mumbling through his tears about it ‘being real,the real me,’ or something like that, I really couldn’t tell.

And didn’t notice, as I said, anything really, including that none of the tears were shifting the makeup at all. At all.

Then I did notice, about the time he looked up at me wildly, his face almost split apart by the dark artistry. I noticed it remained untouched. And then I realised why he was saying:

What did Oscar Wilde say – give a man a mask and he’ll tell you the truth?

Was this the truth of Davy – rock star, animal, fiend, demon from hell?

And if so, where the hell was my friend David? Gone, long gone, like a whispering, crying ghost….

I'm drawn to blogging as a way to share ideas and consider what makes us who we are. Whether it's in our working life or our creativity, expression is a means to connect.
View all posts by Helen →
This entry was posted in Horror Flash Fiction and tagged change, dark, flash fiction, Horror, identity, masks, rock star, soul, stage makeup, truth. Bookmark the permalink.