The Girl in the Wall 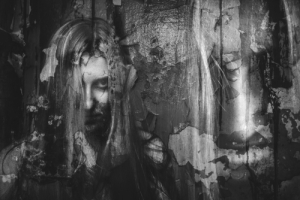 She would appear on full moon nights. Only in that one room, up in the attic, and only then.

He only saw her because, on such glorious light soaked evenings, he wanted to be at the top of the house, looking out to the sky, to the wonderful moon.

He understood, then, that perhaps she wanted the same.

The first time he’d been frightened by her. It wasn’t something you expect, after all, a ghostly face of a girl appearing in the wall beside you. A face watching you, while you watch the moon.

But there she was. The girl in the wall, as he came to call her.

When she didn’t emerge from the wall, or cause him harm, he relaxed. He enjoyed her company, though she didn’t speak. At first he tried to see her other nights, but eventually he knew, it was only ever once a month, as the moon met its fullest glory.

He wished she would speak to him, give up her secrets, her story. But she never would.

She seemed sad sometimes. Like she knew something. Each month, sadder still.

When the doctors gave him his prognosis, he wasn’t even surprised. The girl in the wall had known, he was sure.

The last month before he died, however, when the moon was ripe and she came to the wall to watch its glory with him, she actually smiled.

And then he knew his fellow moon follower had been waiting for him. Soon he would join her, join her in the wall, and neither need be lonely again.

The moon shone down on the dying boy and the girl in the wall. And in its silvery glory was the promise of the morning to come.

I'm drawn to blogging as a way to share ideas and consider what makes us who we are. Whether it's in our working life or our creativity, expression is a means to connect.
View all posts by Helen →
This entry was posted in Horror Flash Fiction and tagged companionship, death, full moon, ghost, haunted house, horror flash fiction, peace, understanding. Bookmark the permalink.

5 Responses to The Girl in the Wall