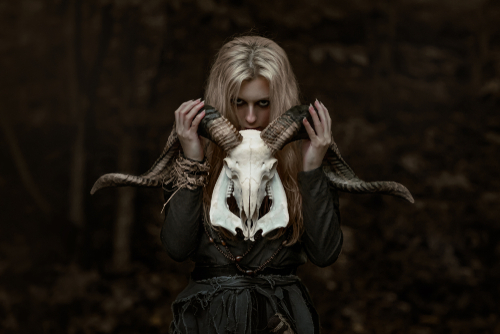 They said the older gods were returning.

They kept skulls of animals to approximate their gods. She liked the skulls very much. She could feel their power and promise when she held them. She could almost hear the gods on their travels, coming home at last.

They’d been gone so long.

She shouldn’t have touched the skulls. She knew. It was forbidden. But no-one knew she did, only her.

And she felt a communion with them that might have horrified the others if they’d understood what it meant. But they didn’t know. They thought their little religions and their little rituals held the mystery and power.

So little did they know.

She knew the old gods were returning because she felt them there already, running in her veins as her blood, as she held their skulls.

She was born for this. For this returning. For this time. Her coming was a signal, her birth a herald. But they didn’t see it, because the birth of a girl would never be considered such.

Ah, but there it was, how perfectly the old gods tricked the faux faithful. There was truth greater, and simpler, than their recitations, their incantations, their spells and their schemes.

And they would know in time, but only when They returned.

And then she would rejoice.

I'm drawn to blogging as a way to share ideas and consider what makes us who we are. Whether it's in our working life or our creativity, expression is a means to connect.
View all posts by Helen →
This entry was posted in Horror Flash Fiction, Uncategorized and tagged belief, old gods, power, religion, ritual, sacrifice, skulls. Bookmark the permalink.