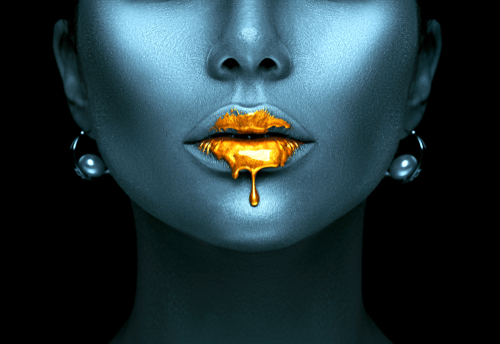 They said she had the Midas Kiss. One touch, one caress, of her lips and all turned to gold in your world. Not literally, of course.

That’s the thing, isn’t it, with promises too sweet? With the gift that seems almost too good to be true? It usually is.

Still, men and women both clamoured for her attention. Nightclubs provided her own special booth, like the most glorious of traps for this glittering trapdoor spider. At art events the patrons would swarm round her, neglecting the art. At theatre opening nights the stars would be ignored, as she sashayed down the red carpet, owning it.

None begrudged her a moment. All wanted what she offered. Just one kiss..one kiss.

And those chosen found their lives transformed. News travelled fast of great wealth, great fame. All the gold in the world.

But what you never heard about was what happened after that. The news followed the next story, the next miracle and forgot the ones that came before. So the cautionary tales never made the headlines, and no-one ever learned in time.

About how it started, three to six months later. At first just a stiffness in the joints, like arthritis. A parched throat that no water seemed to satisfy. A coldness in veins which gradually became more prominent, raised and angry beneath skin more brittle, more dry.

And then the gold. The infestation of gold. Just like King Midas. Just like the fairy story, but this time in real life.

It took eight months in all. She would send her henchmen to collect at that date, the new gold statue for her endless collection. If she was pleased she would keep them, if not she would melt them down for expenditure in other ways. And she grew wealthy in her quiet, secret way.

The woman with the Midas Kiss.

I'm drawn to blogging as a way to share ideas and consider what makes us who we are. Whether it's in our working life or our creativity, expression is a means to connect.
View all posts by Helen →
This entry was posted in Horror Flash Fiction, Uncategorized and tagged death, fame, flash fiction, Fortune, Gold, greed, Horror, Midas, Trickery. Bookmark the permalink.