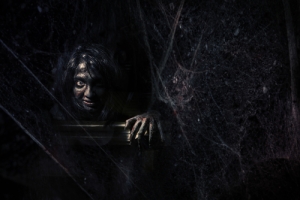 Sometimes she would rise from the waters and come to the lights of the houses nearby.  She liked the old houses best, even if only candlelight blessed the homes.  Spider girl liked shadows, she knew them well.

She would raise herself as high as her little legs would stretch, and crawl up to the ledge of a window, looking in.

I don’t think anyone actually ever saw her.  She lived in tales, fairy stories and night time poems, passed down from mother to child. I would hug myself into myself, listening in wide eyed wonder, and look over to my bedroom window, hoping to catch a glimpse. But I never saw her.

My brother said he did once, one night, when he was only seven years old.  He was never really the same after that. My parents didn’t see this, but I did. Just a look he had from then on. And he’s hated spiders ever since.  He kills them whenever he can, even the harmless ones, which I think is a shame.

He said she was pretty but in a way that death wold be, and his eyes were haunted by the memory. I stopped wanting to see her after that, but even now I wonder, when the shadows fall deepest in the winter’s dark, whether she is outside, straining to look in.

That’s why my curtains are always drawn at night.

I'm drawn to blogging as a way to share ideas and consider what makes us who we are. Whether it's in our working life or our creativity, expression is a means to connect.
View all posts by Helen →
This entry was posted in Horror Flash Fiction and tagged creatures, dark, fairy tales, flash fiction, Horror, Spiders. Bookmark the permalink.