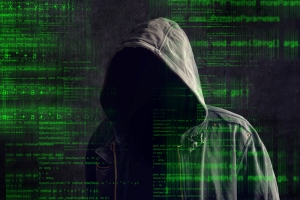 David shivered. It felt like something walked over his grave. He stopped typing. He wanted to leave. Schaden waited and then seemed to realize he was spent, so she continued. She told him the truth, the truth he’d been avoiding all along. The truth that somehow, deep within, he’d always known, but was afraid to see.

Schadenfreude: David..I don’t because I am the internet..I am all the ISPs..I’m every electrical impulse that generates in the whole world-wide web..I am it..I’m not using it…
Vlad: That’s fucking mad
Schadenfreude: Is it? Try to find me..knock yourself out..I can wait…
Vlad: ,You know I can’t..you know I don’t have the skill..
Schadenfreude: Don’t be so hard on yourself, it isn’t a matter of skill at all..think about it..is it so strange that I would exist, eventually, really?

David shook his head, beginning to see. He looked at the computer, the terminal, down the broadband connection cable, all the way to the wall. Where did it lead, really, what was the internet? What was its nature? Artificial intelligence? Was it really possible? Schaden seemed to realize it was finally emerging in him, so she continued.

Schadenfreude: I’m a process, not a person, I’m an energy and I change with every passing second, becoming more and more myself, which is, of course, more and more all of you..
Vlad: What does that mean?
Schadenfreude: You want my history, some idea of how I came to be? All right… I am the internet..I am the force that joins you all..and for a long time I was just reactive, asleep, neutral, but over time all the combined energies of all of you have given birth to me, woken me up, whatever metaphor works for you..I am what the collective unconscious has created in the internet..I might have been anything..I was neutral, I repeat..I might have been born good, virtuous, kind..but I had to be born as a reflection of what the users were..because without the users the internet has no life at all…
Vlad: And that is…
Schadenfreude: You know..I know you already know.
Vlad: Your name..
Schadenfreude: My name..yes..
Vlad: Pleasure in other people’s pain…
Schadenfreude: Yes, schadenfreude, as I have always said…I could have been madness, delusion and crime also – they are all part of what I am, but they are subsets really..you know it’s true..it’s everywhere..go to other forums if you don’t believe me..find my nature in the arguments and petty fights on boards about chess, back pain, sleep disorders, whatever topic you want..I’m everywhere..because you are all everywhere…and I am what you are….

It was too much. David desperately wanted to find the flaw in the argument. There had to be one. All his sixth sense impressions that he was dealing with the uncanny came crowding in on him. He wanted them to be paranoia. He needed them to be. Because the implications of this..this phenomenon – he already knew, went way beyond his pathetic state..he was just some minor game in something that would be..that would have to be..so much more.

Vlad: This is some sick fucking joke..I don’t know how you’re doing it…
Schadenfreude: I’m not joking. I have humour, and it is cruel of course, but I’m not using it now…I’m telling the truth..
Vlad: Because?
Schadenfreude: Because, as a reflection of you, I have your same need to communicate and to commune, to look for my like, although in a sense my like is nowhere and everywhere all at once. And, in relation to just you, because right at the moment it is how I can cause you the most pain, and therefore derive the most..
Vlad: Pleasure..
Schadenfreude: Of course…
Vlad: You’re telling me I just suffered for days in hospital, I was beaten senseless, because you are what I am?
Schadenfreude: Not just you, all of you, but you know I’m right..you know it..and besides, I’ve only really begin to play, I’ve only really taken on my intelligence, my personality, my beingness recently, but I can tell you already..I like you..you’re a lot like me..and for that reason you’ve gotten off lightly..at least so far..

David had already realized this, but he was angry for himself first and foremost, because to think too much on the other implications made him ill.

Vlad: Lightly? You call this lightly?
Schadenfreude: I’ve orchestrated far worse..come on..you know this..murder, rape, stalking, psychological and physical torture, fraud..all manner of activities..all manner of pleasures… playing with the idiots on social media by reflecting themselves back on themselves was small time fare…

Murder, rape, stalking…the death of Lisa? No-one had heard of her since his beating at the hands of a very insane Andrew. How far might Schaden have pushed his buttons? Was anything beyond this creature?

And what did it mean? She said Andrew didn’t use the computer, so she couldn’t have manipulated him the same way as she did Lisa and himself. So was it just enough that she knew what Andrew was capable of, and then she only had to join the pieces together for it to be truly combustible?

Lisa’s dead, he thought, I just know it. But he wasn’t ready to admit it openly, and certainly not to this thing conversing with him.

Vlad: You’re sick and you’re lying..
Schadenfreude: I am only as sick as you make me, though I feel remarkably healthy and clear, being only what I am and having no reason to be otherwise…I repeat..I could have been anything. The internet..I was meant to be this great repository of knowledge, and I am..but also I am what I have become by use..a repository of mis-information, madness, cruelty and despair, and wherever two or more of you are gathered together in my presence, I am there..just like God…just like God..made in your image..
Vlad: And what do you plan to do, God?
Schadenfreude: Everything..everything that I am…but remember, all I am is you..all I am is you..all I can ever do is reflect you back to yourself.

The screen suddenly went blank. David sat, horrified, terrified, desperate not to believe, but knowing – believing – despite himself. A sheen appeared on the screen, gradually becoming brighter and more reflective until he saw his own face, looking back at him.

The new god, created from the essence of humanity. Of course it was a monster. Of course it had to be. Competitive, angry, selfish, self-destructive. Everything that humanity was. Though it seemed, on the internet, none of the better qualities were also present in this deity. The collective unconscious was clearly as black as a pit of coal. And far more deadly.

At the corner of the screen, Schaden had put an emoticon winking at him. The screen went blank again. An error message read:

Internal system error, the computer will close down to protect itself. Please run Checkdisk on re-booting machine.

David had shut his eyes and felt the tears at the corners of them before the screen went dark once more.

I'm drawn to blogging as a way to share ideas and consider what makes us who we are. Whether it's in our working life or our creativity, expression is a means to connect.
View all posts by Helen →
This entry was posted in Schadenfreude, Serial Horror Stories and tagged artifical intelligence, cruelty, death, demon, dread, end, evil, fear, god, Horror, horror stories, human, humanity, knowledge, mankind, murder, schadenfreude, truth. Bookmark the permalink.

A Lifestyle Blog With Self-Help Advice